Flutter is a cross-platform application framework used to build robust mobile applications. Since flutter is a new emerging technology, it has a lot to offer like hot reload feature, faster development, full customization support, and high performance. In this article, I have listed below some top pros and cons for Flutter.

New technological trends in the mobile app development field are soaring high in the world of technology each day. Flutter is also one of them, creating a massive roar amongst developers and business owners. It is a cross-platform framework that is most popular in 2021.

Do you know? As per a report, Android and iOS have occupied a 99% market share, so the need to create cross-platform frameworks has risen sharply.

Entrepreneurs want an app that can run on both of these platforms. Here Flutter comes into the scene and fulfills the entrepreneur's dream to have an excellent app. You can also hire app developers to get one for your enterprise.

Earlier, developers had to create the app for separate platforms that require lots of time, effort, and financial resources. Thanks to the Flutter app development framework, you can now get the mobile app that runs on both platforms.

Popular Apps Made on Flutter 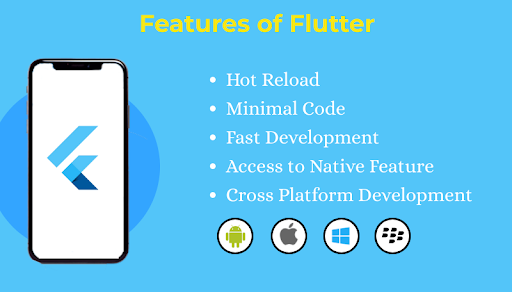 Flutter hot reload feature enables developers to see real-time changes on the preview screen. It takes a few seconds to reflect the changes on the screen, and the developer can continue the work from the same point where he left without rerunning the program.

You can understand it by example. Suppose a developer fixes a bug while developing the app, and he wants to see the change. He can see it instantly on the app screen. The feature thus helps developers to build the app faster without consuming much time and effort.

Futter framework enables developers to build the app faster with the help of ready-made widgets provided by itself. It assists developers in creating dynamic UIs in less time and effort.

The best thing about flutter is that it doesn't require a Javascript engine to interact with native components. The application will smoothly run on any device as flutter uses Dart to communicate with native features directly.

It uses AOT (Ahead of Time) & JIT (Just in time) compilations that assist developers to run the app faster.  Dart reduces the startup time and allows the application to perform better.

Flutter has a layered architecture that gives developers complete control over every pixel on the screen and allows developers to animate graphics, text, and videos with absolute control.

5. Proper Documentation and a Strong Community

Moreover, it has a vast community that can support developers if having any issues while developing the mobile application. You can also contact any of the Indian app development company to get the application.

Since the flutter is a new technology, it has several features in the pre-alpha stage. One can not ignore the fact that it is still in its immature stage. So, a developer can not fully rely on some features that are still in the evolving phase.

Flutter has some platform limitations that create obstacles for developers to develop the application smoothly. It does not create native components for native platforms.

Since Flutter and Android applications come from the same developer, i.e., Google., so Android and Flutter sync with each other smoothly, the iOS platform does not sync with Google. Google resolves the issues of Android if it comes in the way of app development.

Another disadvantage of Flutter is the large size of the application. Apps made on Flutter take a lot of space and time to load. It makes the user experience pathetic and down-worthy.

The minimum size of the Flutter application is 4.7MB, which is bigger than the other Java(539KB) and Kotlin(550KB). The user device can not afford large file apps as they have limited storage space.

Having discussed the pros and cons, let's focus on some popular apps developed on the flutter framework. 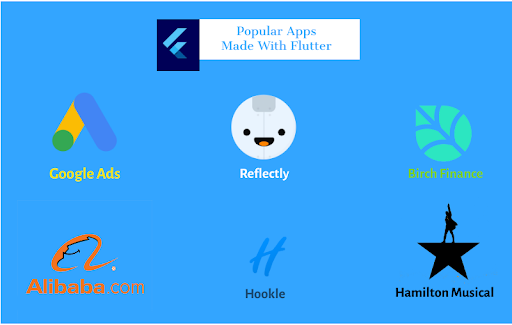 Who doesn't know the Google Ads? It's a utility platform built on Flutter. Google has created several apps and has transformed the Google Ads using Flutter. The new version offers real-time alerts and in-depth campaign details.

Alibaba is an eCommerce website popularly known worldwide, and it's another feather on flutters cap. It hires Flutter developers to make changes for facilitating the transaction across the globe. Flutter has also enhanced the user experience of Alibaba.

Reflectly is the lifestyle app built with Flutter and famous worldwide amongst its users. The app replies to each query made by the users. Moreover, it is powered by Artificial intelligence that automates several processes.

Flutter has a lot more to offer, even after having some disadvantages. Since it's a new emerging technology, it has excellent thriving features to develop dynamic and efficient applications.

You can contact the best flutter app development company in India to develop the app according to your business requirements. It will help you to create effective, high-performing, and outstanding mobile applications that will lead your business to the utmost a new level.

As you have also noticed in the blog, some of the best popular apps like Google Ads, Alibaba, and Birch Finance are built using Flutter. You can also stand in the row of these top-used apps.