Why do Finnish babies sleep in Cardboard Boxes?

Cardboard boxes are used as cribs in Finland due to a government initiative to control infant mortality in the country, and the program is a success since 1938.

Cardboard boxes can be used for a number of purposes, but have you ever heard of them being used as baby cribs? Surprisingly it is true for Finland. Since 1938, the Finnish mothers are putting their kids in the supply containers that are provided to them by a government-initiated program. This program is known as ‘’Maternity package’’. 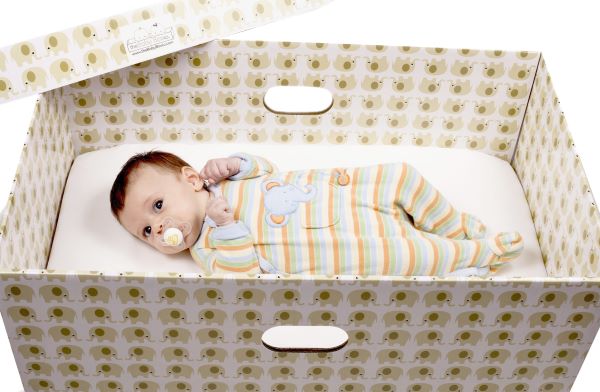 The program was initiated to provide low-income families with basic child care supplies but with having a string for encouraging pregnant women to go for a medical checkup during the time of pregnancy in order to get these supplies for free. This Maternity package is considered to be the basic reason for Finland now having the lowest infant mortality rate in the world.

In the 1930s, the economic conditions of low-income families were very bad, and the mortality rate for newborns was highest among them. Poverty was the basic reason behind rising mortality rates as families were not in a condition to purchase all the essential child care supplies in addition to this, harsh weather conditions also made the conditions worse. The statistics were so high that one out of every ten kids died in the first year of birth due to improper care. The government decided to initiate a Maternity package scheme in 1938 in order to provide basic child care supplies. These packages arrived filled with more than 50 items, and once the cardboard carton was empty, it can be turned into a baby crib simply by putting a mattress inside.

The Process to get these Boxes

In order to get these baby care supplies, the mother has to first go for a checkup in the 4th month of pregnancy. This clause was added due to the fact that women in the 1930s didn’t consider it important to attend checkups during pregnancy, and eventually, it led to various types of deficiencies in newborns. This style of social development was considered as a functional way to redirect pregnant women for proper medical checkups. The scheme was also cost-effective for the government as they can get these baby cribs at low rates from the custom cardboard boxes wholesale suppliers. This scheme was an instant success, and this is the reason behind the continuation of the program until this date.

Supplies inside of the containers

These containers are not only for putting babies for sleeping, but they are a full pack of essential supplies for the infant. They contain more than 50 items, and the empty Custom Cardboard Boxes are used as a sleeping crib for the baby by putting a mattress inside.

Once all the items are unboxed, the empty container is then padded with a mattress in order to develop a crib for the baby. These supplies are essential in order to keep the infant safe from harsh cold weather as card stock material helps to retain a moderate temperature due to its nature, optimal for pampering the newborn in a perfect way.

Results of this program

This program was effective, and the functionality of these containers is the basic reason behind the continuation of this development strategy to this day. The statistics of infant mortality speaks for itself as there is a continuous decrease in the mortality rate among the newborns. At the start of this campaign, one out of every 10 newborns died in the first year of birth, but now the mortality rate in Finland is one of the lowest in the world, only 2.52 infant for 1000, which is even half than of the United States.

Reasons for the success of this program

The first maternity package was distributed in the late 1930s, and from that time until now, the program is one of the biggest and historical successes. The reason behind this success is that the Finnish provided these baby care supplies for free, and all the low-income families were attracted to this offer as they only have to go for a medical examination before the birth of a child, nothing more than that. The items in the package were also the basic needs, and the continuous examination of pregnant women lessened the risks of any fatal diseases in the newborn. This program also provided the concept of ‘’equal start for every kid’’ by providing all the essential baby care supplies to low-income families. Due to these facts, now Finland's lowest infant mortality rate in the world, only .25 % out of 100.